What Happened to the Bennetts by Lisa Scottoline 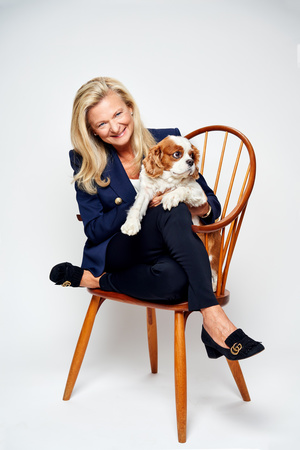 I pray, and then I start.

I was a Nancy Drew freak, and still am. I read all of them a bunch of times and now I collect them because she meant so much to me. But I tell you, I can’t remember a single plot and I don’t think the plot matters in them. What really mattered to me, and what’s stuck with me even today, was that she was a young girl in the driver’s seat of her roadster, sending herself on a grand adventure. There’s no better metaphor for life.

Neither. I need TV, and lots of it. I put on a good “background show” that I can binge, one that I’ve already seen so I don’t have to pay attention. I choose it according to whatever I’m writing to get me in the headspace. For example, during BENNETTS, I listened to Ozark. And during LOYALTY, my upcoming historical about the rise of the Mafia in Sicily, I listened to the The Sopranos. TV is music for writers.

Both. I can write only when I’m alone, and I live alone and frankly love solitude. And I’ll tell you my trade secret – often I dictate difficult passages or particularly moving ones, so I can get in a better flow. I could never dictate and have anyone overhear me. It’s like the first draft before the first draft! That said, I’m a people person and I do love people! I feel very lucky and blessed in this life, in which I get the solitude in which to write as well as the ability to go out and play whenever I want to!

I love giving advice to new writers! I want to encourage everyone to write! I think everyone has a book in them, and maybe a series, and this profession is open to anyone and everyone. Unlike law school, where you have to graduate in order to become a lawyer, there’s no entry barrier, farm team, or anything of the sort! And there’s no rules either, because it’s a free country and we need more and more voices, of all different kinds, an array of diversity, which is what the founding fathers were saying by the First Amendment, which was first for a reason. So my advice to new writers is always, like Nike, just do it!

My method is to tell myself the story as I go along, and I never outline. I make myself to write down the whole first draft, and I say to myself, “get it down, then get it good.” I’ve written over thirty novels this way, but any method that works for you is perfect! Go for it! And when you’re not writing, read and read and read! Good books will teach you something, and bad ones will encourage you because you’ll learn you can do better!

Lisa Scottoline has been one of my favorite writers (and people) for many years now. For my September book pick, I chose her novel, What Happened to the Bennetts. Recently released in Paperback, this may be her most action-packed thriller yet!
~ Pennie

What inspired you to write What Happened to the Bennetts?

I was being tailgated by a pickup truck in exactly the location in which the novel is set, and all of a sudden I got the idea, what-if? What-if can power a lot of great novels because it comes out of a specific life circumstance and the feelings you’re having in them. It makes for an instantly relatable novel, and it’s sheer good luck that gives it to you! Or maybe that’s sheer bad luck?

The protagonist, Jason Bennett, is thrust into a lot of situations the average suburban dad wouldn’t know how to handle. How did you think about developing his character?

I based this character on my father Frank, with whom I was very close, and I think he would define himself as scenic-route kind of guy. But then again, Jason has to leave his comfort zone to defend his family, because they face the extrinsic pressures of the bad guys as well as the intrinsic pressures of being in WITSEC and cutting off ties to extended family, friends, and school. Jason’s journey ends up being a very modern one, because nowadays, no matter which side of the political spectrum you’re on, that institutions are not what they used to be and that sometimes it’s hard to tell the good guys from the bad. That’s why there are “good bad guys” in the novel and “bad good guys,” and it’s up to Jason to distinguish between the two. I think it’s a journey that all of us are on, and I know we all have strength we didn’t know we had, to get us through the most difficult of circumstances.

The Bennett family is placed into witness protection early in the book. What was your process like researching the ins and outs of WITSEC?

I’ve written over 30 novels about justice, and I have made a lot of contacts in all levels of law enforcement, as well as the judicial system. Plus I’m lucky enough to know someone who had worked in WITSEC for most of his professional life. I knew that the program was set up to protect criminals who were flipping on other criminals, but I wanted to explore what happened if an ordinary family is placed in WITSEC. My source confirmed everything I thought, and gave me lots of insight and details, all of which I put into BENNETTS. Like, for example, I couldn’t believe what would happen during a family funeral! It’s astounding, but it’s procedure because of the respect that WITSEC wants to show protectees in its custody.